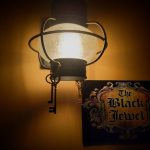 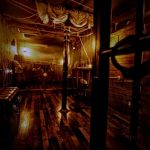 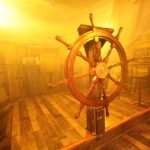 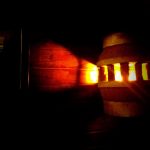 During a violent storm you and your fellow landlubbers have capsized your vessel near an outcropping of small islands. Thankfully a large ship is approaching – you have been saved! However, when the crew brings you aboard, you suddenly realize you’re on the infamous pirate ship “The Black Jewel” with Captain Jack Blackerby. Tales of his guzzling down rum, chasing busty wenches at near by ports and sending prisoners to Davy Jones’ locker have traveled near and far.

Captain Blackerby trusts no one and doesn’t allow strangers on his ship, but he is in desperate need of more swabbies for the ship. Unfortunately for you, the Captain sees you eyeing his treasure chests and has become convinced you are on board to hornswaggle him out of his fortune.. The first mate has been ordered to lock everyone to the brig to await your fate. Meanwhile the captain has gathered his band of pirates and set off to find more loot to add to his fortune.